These are all words commonly used to describe a tree, a tree so special in West Africa that it is at the centre of most important life rituals. When a woman gives birth, she lathers her baby in a butter made from the shea tree to protect delicate skin from the hot sun. Upon marriage, the bride brings shea butter with her to show that she will be able to provide for her new household. In death, a body is often anointed with shea before burial.

The shea tree is associated with women; traditionally, the seeds and butter are even called ‘woman’s gold’. Women collect shea nuts, women cook the nuts, women produce the butter and women sell it at market. In a world for women where access rights and control over resources is complex – and rare – the customary practices around this tree are extraordinary.

Today, shea is a hot commodity. Shea butter now travels from the hands of West African women across countries and continents, processed and packaged into items ranging from chocolate to face creams. But, they are not reaping enough of the rewards of shea’s newfound presence in the global marketplace. With exports booming and demand increasing, profits are not reaching the 16 million women in 21 African countries who live and labour amid shea.

Given that men usually manage many other income sources, shea is one of the few ways that women can have financial autonomy, as they often control the income they make from shea.

And the per kilo price of shea has increased in the last decade. Back in 2002, the European Union published a directive that allows the replacement of up to 5% of the weight of chocolate with a cocoa butter equivalent. Shea butter, with its high-quality fat content, has been the go-to replacement, and the export market has blossomed. According to the Global Shea Alliance, production of shea butter has grown by 600% over the last 20 years. Demand is outstripping supply.

So why aren’t women sharing in the profits?

One reason is because 95% of Africa’s shea is exported raw and goes through three or four intermediaries before finally being sold, limiting the value that female collectors get out of their shea sales. And it is men who dominate the more profitable areas. 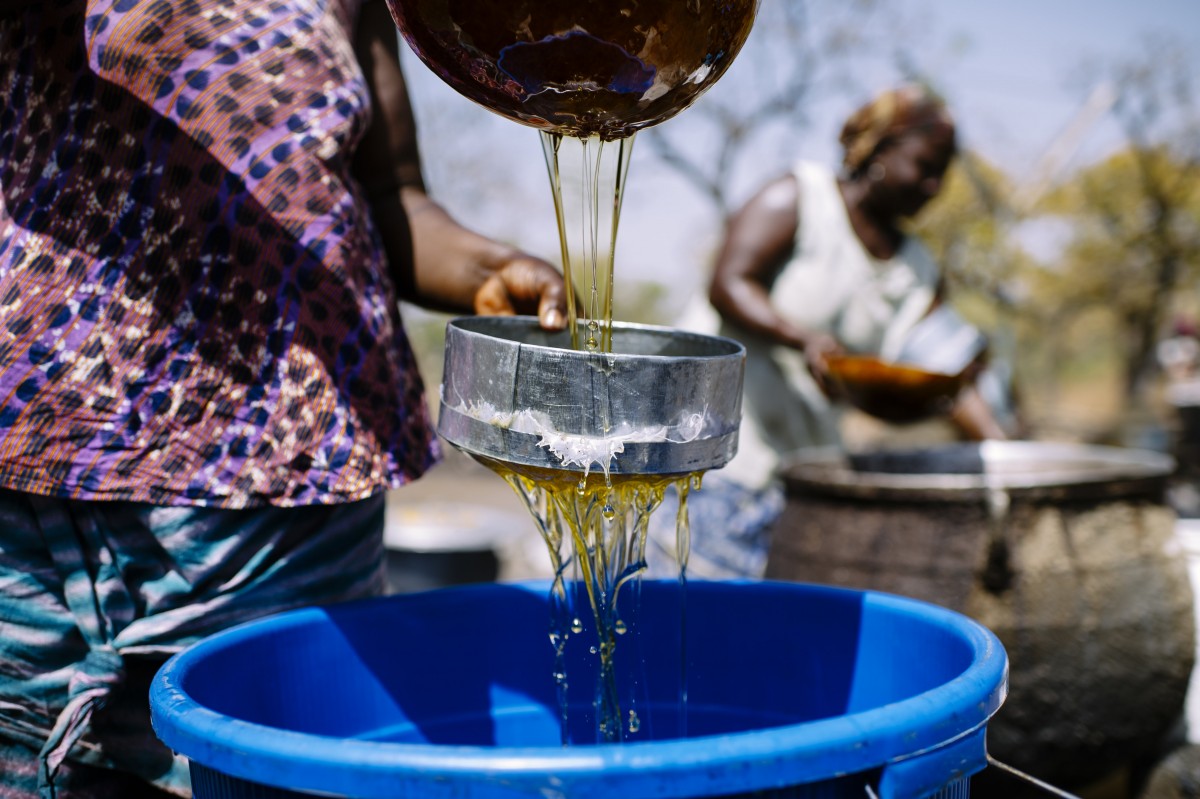 Another reason is that shea nut collection and butter production is part of the traditional work of women along with childcare, cultivation of food crops and running households, work that is often invisible in analyses of the shea supply chain and women’s labour more generally. If all that work – those long walks to distant trees, the effort in collection, the treks for wood to fuel fires to produce shea butter – was recognized and the market calculated the work accurately, then women should be making much, much more income.

As with other commodity crops, when the global community starts to value it, local communities can suffer. Shea is no different.

Shea trees grow in different spaces, in savannah woodlands, in fields where they serve to protect cereals and to sometimes mark property. While West Africa’s forests are being slowly cleared to make way for farming, shea remains one of the few trees that is still allowed to grow in farm fields because its presence complements other crops. Researchers have so far had limited success cultivating shea trees, which take 15-20 years to mature and become productive. So for now, the tree’s continued use in rural communities where they are protected and naturally regenerate is perhaps the only way for them to survive.

Traditionally, women have the right to manage and use shea trees, even though arrangements may differ according to ethnicity, settlement history and social status. But with the demand for shea butter increasing, more men are entering the arena, particularly in privileged positions overseeing aspects of production and trade. This is because women often don’t have the power to make decisions about the trees or over the land where trees grow.

Like other indigenous trees in the Sahel, the shea tree serves multiple purposes. The charcoal derived from its wood is sought after, but due to the high value of shea butter, communities prioritise its use for butter. Customary regulations protect the shea trees in many countries, but the challenges faced by rural youth in making a decent living are putting more pressure on the trees, with the growing number of young men seeking incomes in charcoal production that includes shea trees.

With exports booming and demand increasing, profits are not reaching the 16 million women in 21 African countries who live and labour amid shea.

This increasing use of shea trees for charcoal and the very slow and sometimes completely absent regeneration of the trees pose a serious problem. If the current socio-ecological system continues to be disrupted, then its promise for rural incomes could swiftly turn to losses.

The rights of women and the protection of shea may be better thought of as inextricably linked in the parts of West Africa where the trees grow. By empowering women, shea trees can be better protected. By protecting shea trees, women’s rights can be better secured.

We need to ensure that the women who collect shea benefit from being part of the global marketplace – and that they start benefitting now.

1.     Better understanding and accounting for the dynamic and complex land and tree rights in shea producing landscapes.

2.     Including ecological and social safeguards in the shea trade, from the top down and the bottom up. Those who profit the most from the trade in shea have a responsibility to support those who don’t, creating conditions so women can assert their rights.

3.     Supporting practices and research that foster regeneration. Traditional practices used to consist of a rotation between fallow lands and farmlands, enabling shea trees to regenerate. Given the current high pressure on land, there are very few places that practice fallow agriculture, and the trees are thus disappearing. Scientists are racing to find ways to cultivate shea, but funding is limited.

4.     Recognizing and counting women’s ‘invisible work’ and focus on the most vulnerable. If one compares the amount of effort women make in the shea value chain with what they earn from it, it is clear that there is disparity.

5.     Helping women band together. The Global Shea Alliance empowers women to earn their fair share by helping them organize into cooperatives, and giving them access to storage infrastructure that enables them to sell to larger buyers. Incomes have increased by 30-50% compared to just selling at the local market. The Enhanced Integrated Framework is training small businesses processing shea how to increase production, as well as assisting with access to new markets and promotional skills.

Not only does shea nourish, heal and protect, it has a positive environmental and social impact and contributes to preserving one of the most important landscapes in West Africa. Its use can help West African countries advance in their development, provided, of course, that women are at the centre.

These indigenous trees – these trees that refuse to be cultivated – are perhaps challenging our current systems and calling for something entirely different.