by Michelle Kovacevic / in Impact story

The first African country to ban plastic bags now has another notch to add to its environmental belt – a comprehensive approach to recycling and repurposing electronic waste.

“Rwanda is among the few countries that have an electronic waste policy and regulations, and is the second in Africa to have a state-of-the-art e-waste dismantling and recycling facility,” said Olivier Mbera, country general manager of EnviroServe Rwanda, which runs the recycling facility.

“Rwanda is setting a great example for other countries in Africa,” he added.

Just three years ago, Mbera was overseeing the development and implementation of Rwanda’s e-waste management project in his role with Rwanda’s Ministry of Trade and Industry (MINICOM).

“At the time, the government had been promoting ICT penetration in rural areas through different initiatives such as a one laptop per child program and an off-grid rural electrification program, and there was a move to have all services delivered online through Irembo,” Mbera said.

“However, there was no solution for what to do once these electronic and electrical products reached the end of their life. The government and other private institutions had been renting warehouses to store all the e-waste, which was expensive and unsustainable. The government wanted a solution that took a whole-of-life approach.”

E-waste management has become a major challenge facing many African countries because of lack of awareness, lack of environmental legislation and limited financial resources. Currently, e-waste in Africa is predominately disposed through open dumping, burning and landfilling, but with heavy metals and other hazardous substances present in electronics, these methods have potentially serious implications for human health and the environment.

So, in 2008 Rwanda began policy discussions around how to manage its e-waste. After consulting those involved in the sector, with support from the Enhanced Integrated Framework (EIF), the country approved an e-waste policy in 2016.

“The policy provided guiding principles in dealing with e-waste and roles and responsibilities for institutions. The next step was to create legal instruments such as a law and regulations and adequate infrastructure to handle the increasing generation of e-waste,” Mbera said. 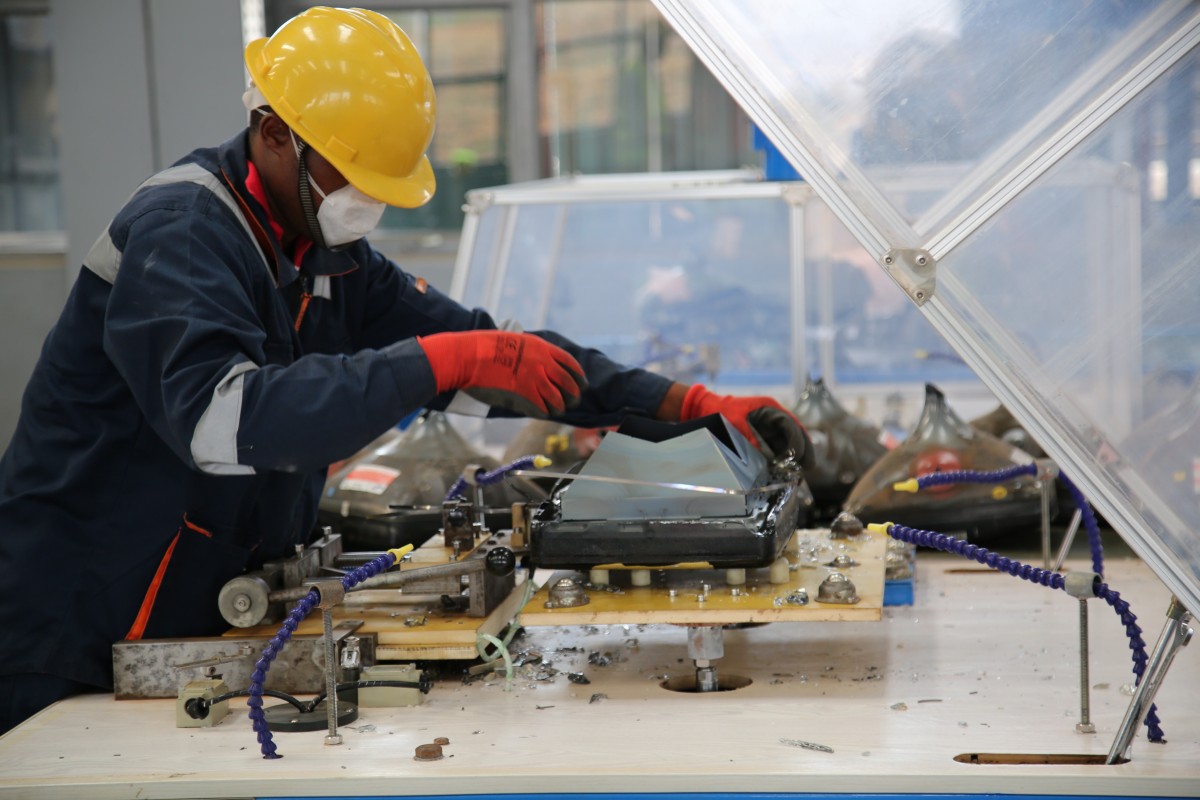 EIF Coordinator Peter Donelan said of this work in Rwanda, “Often it is difficult to see the visible benefits of policy strengthening work, so it is great to actually see what has happened in Rwanda.”

“It was a number of years ago that EIF worked with the Government to get trade into its national development agenda, and that included helping with the creation of this e-waste policy. With the environmental gains, the job creation and the income generation, I am pleased that Rwanda is now leading the region on e-waste.”

A detailed inventory on e-waste generation was also conducted as part of the project, and it found that Rwanda had the potential to of generate 10,000-15,000 tonnes of e-waste per year.

“This was the baseline data we needed to be able to put in place proper infrastructure for sustainable e-waste management in Rwanda,” Mbera said.

An e-waste recycling facility was built in the eastern part of the country and is currently managed and operated by the private sector company EnviroServe Rwanda Green Park though a public-private partnership agreement with the Government of Rwanda.

EnviroServe Rwanda currently has six collection points where members of the public can drop off their unwanted electronic goods, and is aiming for 30 by the end of the year  – one in each district of Rwanda and at border posts.

“Last year we collected 3,000 tonnes of e-waste, which is 30% of the capacity of the facility. This year, we are focused on increasing not only the number of collection centres to 30, but also raising awareness amongst the general public about where they can responsibly dispose of their e-waste,” Mbera said.

He added that COVID-19 has had a big impact on their work, delaying the establishment of collection centres throughout the country.

EnviroServe Rwanda also offers a collection service for large organisations and companies, not only in Rwanda but also servicing companies in Uganda, the Democratic Republic of Congo and Burundi.

“We recognize that even with these measures we are not able to access all the e-waste in Rwanda so we work with general waste collection companies, training them to separate the e-waste and give it to us,” Mbera said.

Once the e-waste reaches their facility, it is separated, weighed and recorded.

“We keep records of where the waste comes from and whether the client has requested refurbishment or their data wiped,” Mbera said.

Rwanda is among the few countries that have an electronic waste policy and regulations, and is the second in Africa to have a state-of-the-art e-waste dismantling and recycling facility.
- Olivier Mbera, EnviroServe Rwanda general manager

If they are able to repair and refurbish the equipment, they then either sell it at a heavily discounted price or donate it to local schools.

“So far we have sold or donated nearly 2,000 refurbished computers to schools,” Mbera said.

“We crush the plastic into small pellets and this is sent to other industries to make new plastic materials such as chairs or construction material. The steel we recover from discarded items is processed into high quality iron bars by a facility next door to us. These bars are being used in the construction of schools and new airport construction,” Mbera said.

“With the circuit boards we have to export them to Enviroserve Dubai where there is higher tech and environmentally friendly facilities to remove precious metals.”

This has spurred the company to take their capacity a step further.

“We are aiming to expand and become the first lithium battery recycling facility in Africa. We are currently conducting a feasibility study with the support of MINICOM and the EU and hope to attract significant investment,” Mbera said.

Not only has the facility made great environmental gains, but it’s also created employment for more than 400 people.

“From collection to refurbishment to construction, so many jobs have been created to support the industries of the future,” Mbera said.

Many visiting country delegations have been interested in the model that Rwanda has adopted for its e-waste recycling, and Mbera believes not only is it easily applicable to other countries, but it is also a good example for how the circular economy can work in Africa.

“The principle of a circular economy is to put all waste to use again. E-waste is often looked at as a problem, but, as we have demonstrated, it is also a resource. If we all just put a little more effort into waste management, we could achieve great things.”

How can the EU’s border carbon adjustments avoid unintended consequences for LDCs?